Like any good team that does it's homework, it's important to know the competition; and the U.S.'s competition for game one is England. And who better to highlight today than the new captain of the English Squad, Steven Gerrard. This 30-year-old was called upon to become team captain after it was determined that Rio Ferdinand would not participate in the World Cup due to injury. 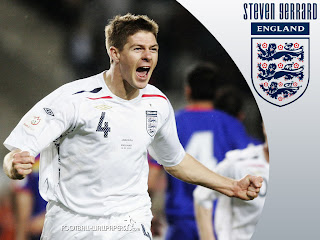 Gerrard is the captain of the English Premier League team, Liverpool and he'll need to use the skills he's learned with that team if he expects to lead his team to victory in 2010. Gerrard plays in the midfield position which is a perfect mix of offense and defense and his speed makes him a great asset. For those of you non-soccer enthusiasts,  a center midfielder is your "play-maker" position and you can think about it as the soccer quarterback. Gerrard will need to control the center of the field and change the direction of the ball to connect with quick-tongued powerhouse forwards like Wayne Roonie (who was red-carded and thrown out of the game in WC 2006 in England's game against Portugal in part because of his fool language) if he wants to be successful against the US in game one. If he is successful finding the goal it will most likely come from a long-distance shot out side the 18 (outside the 18 means literally outside of the larger 18-yard box).

Check out some great highlights of Gerrard here, and expect to see many more as England competes in Bracket C against the US, Algeria and Slovenia.