After two days of highlighting some of the trickiest strikers on the planet I decided that today I would focus on the player that hardly ever has a chance to score, the keeper. 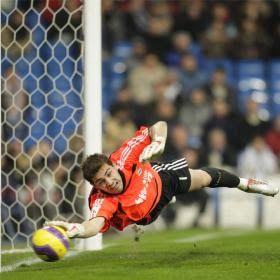 Who better to focus on than the the man behind 10 of the best players in the world and who is leading the team  considered the favorite to win the World Cup....Iker Casillas of Spain. Casillas is the captain of the Spanish National team and will be proving why he has a leadership role as he fights to prove to the world why he and his Spanish teammates are the favorite for the World Cup title. Casillas himself is also the early front-runner to win the Golden Boot award, for best goaltender. Casillas plays professionally with Real Madrid (the same team as Ronaldo). He won the FIFA best goalkeeper award for the 2008-2009 season and those skills will come in handy should Spain see a team with players the likes of Ronaldo or Messi; more importantly, if Spain should have an epic game with a shoot-out ending. Check out some of Casillas best clips here.

Spain is in Group H and is the second overall seed going into the games. They will go through group play against Switzerland, Honduras, and Chile and their first game against Switzerland will kick off on June 16th at 9 am CST. Spain had a perfect record of 10-0 for the World Cup Qualifiers. They are a force to be reckoned with, but not unstoppable. The US Men's National Team upset the soccer superpower in the 2009 Confederations Cup.