Highs and Lows and a Hospital Stay

Another sleepless night means more time to jot down all the craziness that keeps running through my mind. It's hard to believe that we are literally days away from meeting our baby boy. If I don't have this baby naturally we are being induced on August 5th - a week from tomorrow!

As labor approaches I seem to be so up and down emotionally. My hormones are out of control, I'm so excited to meet our little boy and I'm overly anxious about the delivery process.

Let me start by saying that I've been really nervous about going into labor with baby #2. If I learned anything the first time around it was that the circumstances of pregnancy - labor and delivery especially - are almost completely outside of my control. Things happen just as God plans them whether my birth plan aligns with the plan or not, is really up to him. Which is why my birth plan is pretty simple:
It's not a complicated list. In fact I've already accomplished many of the items I was hoping to fulfill. But the thought of having this baby on the side of the interstate during Atlanta rush-hour traffic, is keeping me up at night.

Last week I was so nervous when I started having contractions. I followed all the protocol and called the doctor who requested that I come into the hospital. After the late night drive, I was hooked up to monitors that confirmed the contractions were real - I had a nurse tell me I was dilated but not enough to be considered in active labor. They were going to observe me for three hours and if the contractions continued, or if I continued to dilate, they would keep me longer. Well after a quick check three hours later they confirmed that both things had occurred. So they gave me some pain medication, put me to sleep and told me if the contractions or dilation continued it would be considered active labor, otherwise I would be going home. I was still a ball of nerves - I just didn't want to hear that all this was for false labor. 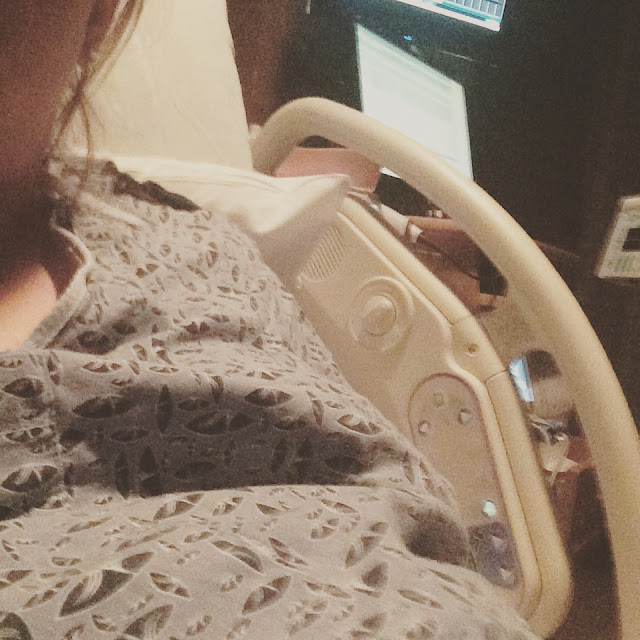 When I woke up the next morning, they confirmed that the contractions had almost completely stopped but I was continuing to dilate. That was the news we needed to confirm that, "this was it" and they said that we'd be heading home with a baby. Meaning baby boy was on his way! All the nerves I had about false labor disappeared and I was instantly overwhelmed with excitement. It wasn't long after that when the doctor came in and my anxiety was back. He confirmed that my contractions and dilation just weren't adding up and it was actually false labor. I went from high to low in a matter of moments. We packed up and headed home - no baby - this mama was sad.

Three days later the same thing happened but this time after being admitted and getting the pain medication my husband and I decided we'd spend the night in our own bed instead of in the hospital. False alarm #2 and still no baby.

Now I'm gun shy. I've had contractions on and off for days but I don't want to go to the hospital unless I know for sure that the third time is the charm. I know that God works in his own, perfect time and I have to be open to his plan so I'm praying for patience with each passing day. I know that this baby is coming soon but the waiting is driving me crazy.

At this point I will likely be out of commission for a bit, at least until baby arrives, but feel free to follow along on our journey via Instagram.