What is the What - Book Review

March barefoot across a country, dodge enemy tribesmen and Arabs that are hunting and killing your friends and family, avoid hungry animals and the sweltering sun as you make your way to an unknown country. Now imagine doing all of that as a child, without the safety and comfort of your protective parents. Valentino Achak Deng tells his childhood story of perseverance and survival in the novel, What is The What told and fictionalized by Dave Eggers. What is the What tells the story of a young boy who quickly grows into a man as he traverses Sudan seeking safety in the arms of different refugee camps until he finally ends up in America. Valentino's story is one of the Lost Boys of Sudan and like so many others that consider themselves a Lost Boy, the story is tragic. 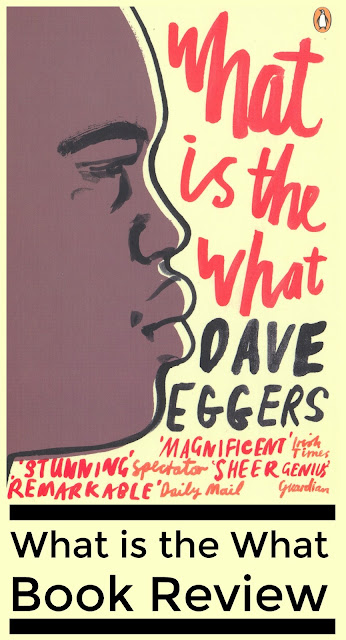 The book jumps from present day to childhood memories and back again. In the book's present day, Valentino is living in Atlanta, GA facing the trials of an immigrant working hard to understand a culture that is so vastly different from where he was born. Before the war broke out in Sudan, Valentino was being raised in a small village where there were no motorized vehicles and the buildings were made of natural materials and stood only one story tall. During the war, he journeyed through a country torn by cultural differences and greed until he landed in a refugee camp and cultivated a life that was almost unbearable. After the war, he moved to America and was met head-on with criminal ignorance, issues of discrimination, and a lack of education. Valentino managed to escape the war but he was consistently met with a lack of humanity. People so easily turned their heads and ignored his plight and the plight of all those young men and women who had endured unimaginable devastation.

This book is meant to bring the unimaginable to life, to tell the true story of what happened in one man's life, and to hopefully inspire change.

I'll be honest, I was completely ignorant to the poor and desolate living conditions typical of refugee camps. In my mind, they were safe havens for people trying to escape persecution, but the reality is that they are breeding grounds for criminal behavior and isolation. The countries that host refugee camps provide the refugees with the least of what they are able to give - the worst lands, meager food rations, and very few ways of earning an income. The refugees, who have done nothing but seek a better, safer life for themselves and their families, are discriminated against and treated as substandard. These refugees have not chosen this life - it was forced onto them and yet they are treated like second-class citizens. It amazed me to learn this and I was ashamed of my own ignorance, especially in light of the current Syrian refugee crisis.

What is the What confronted many social and cultural issues, like the conditions at refugee camps, throughout its pages. It is not a beach read but it is enlightening. It will motivate you to think differently about the people who truly suffer the consequences of war. It will motivate you to be more humane. It will hopefully motivate you to make a difference. In fact, just by purchasing the book you can start to help others because the proceeds from the sale of the book go to a non-profit foundation started by Valentino and Dave Eggers that aims to increase educational access to South Sudan.

I encourage you to read this one and when you do, please share your thoughts because a couple paragraphs of a review does not do this book justice and I'd love to dig a little deeper with anyone that's read this one.

What are you reading? Should I add it to my beach read list? If so, tell me about it in the comments below.

I've been doing a little book review roundup over the last couple of weeks. If you're interested in some of my other book reviews, check out my thoughts on A Man Called Ove by Fredrik Backman and Left to Tell: Discovering God Amidst the Rwandan Holocaust by Immaculee Ilibagiza and make sure you follow me on Goodreads.