We walked into our local grocery store one evening, and my ultra-observant son noticed that there were not any grocery baskets available. My son is one of those kids that can not let things go, so while I pushed him and his brother up and down the aisles, scooping up cereal and bananas, he was busy counting the baskets in the produce section, the pharmacy, and the bakery. Soon the groceries were loaded into the cart, and we made our way to the checkout counter. While the friendly associates rang up our food, my son casually struck up a conversation with the gentleman who was in charge of neatly placing the bread above the eggs.

"There are no more baskets by the door," he said, "but there are lots back by the hotdogs." The older man looked up and kindly entertained my son, conversing with him like it is entirely reasonable to have a conversation with a three-year-old. "Oh really?" was his reply, "I've apparently been slipping up on my job, I need to get some more baskets." My son shrugged, "well there are some other baskets over there" he said pointing to those laying at the foot of the checkout counter. The gentleman smiled sweetly and thanked my son. My big boy beamed proudly and announced, loud enough for anyone within shouting distance to hear, "I'm a big helper mommy." I saw the gentleman smile to himself as we walked out the automatic doors.

Several days later we returned, and my son once again inspected the basket selection in each department. He approved of the baskets this time around and said so each time a green stack came into view. To his surprise and elation, the same man was working that day. My son, never short on compliments, walked right up to him, smiled, and said, "there are lots of baskets today. You are doing a great job." It was at that moment that something changed. The man just stopped what he was doing and assisted us to our car. He and my oldest son chatted the entire walk to the vehicle. My son asked the man for his name because he was still too young to read the name "Lawrence" displayed on the man's nameplate. After that encounter, the two quickly became friends. Each visit to the store would bring talk about baskets, and groceries, and little brothers. Given that the two have more than 60 between them in age, they seemed to connect on a level I never could have anticipated. Every time we went to the grocery store was like Christmas morning. My big boy would wiggle in his car seat and ask, "do you think Mr. Lawrence will be there? Do you think he will need a helper today?" The joyful anticipation he had to go to the grocery store was palpable.

Mr. Lawrence became a household name during playtime. When we set up our pretend grocery store, I noticed my son asked to be Mr. Lawrence. After arranging the Fisher Price cash register and his plastic vegetables, he would carefully place the basket in the front of his imaginary store and put on an apron to be just like his older friend. Even while he played, he was careful and deliberate when he bagged food, just like Mr. Lawrence showed him.

This playtime ritual began to happen quite often, so one day when we visited the store, I stood with Mr. Lawrence as he helped me load the groceries into my trunk. The kids were both strapped into their car seats, and I mentioned that he left such an impression on my son that he was now emulating him at home. I do not know if I saw a tear or not, it could have all been in my imagination, but I could tell that he was moved by my story. He smiled his kind smile and said that he loved my boys and that he was always so happy to see them when they came to the store. I knew he was not just saying that to provide excellent customer service because unbeknownst to Mr. Lawrence I had seen him at the store when I did not have my children. He did not notice me, but I could tell by his body language that he is tired. I imagine that he has lived a full life and has seen better days but when he sees my children his entire demeanor changes. His face is bright, his shoulders are high and stable, and his smile is contagious. He looks just as happy as my boy, and their conversation is never dull or without excitement.

My son and Mr. Lawrence have a special friendship that happens between the checkout counter and the putting the groceries into my trunk, but they love one another. I have the awesome benefit of watching their unique, friendship flourish. They do not seem to notice the generational age gap. I get to witness how much joy they bring to one another's life. Mr. Lawrence's kindness, gentleness, and attentiveness to my children are unwavering. He never fails to wave hello, share a smile, and allow my son to help him bag groceries and push carts. He is patient and friendly, and to us, so much more than just the man who works at Publix. Mr. Lawrence is a superhero at our house. 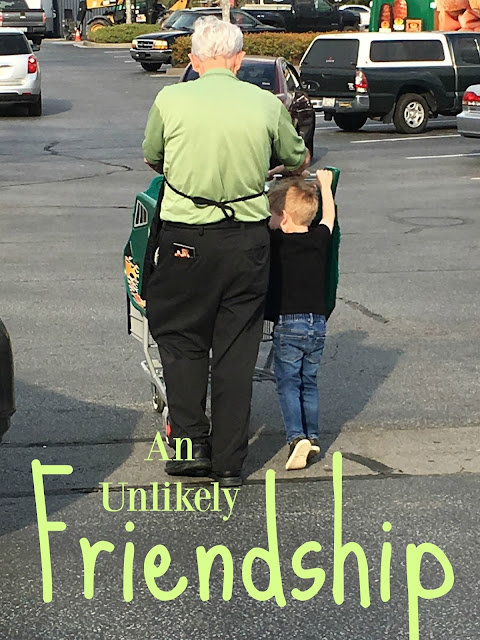 Mr. Lawrence if you ever read this, thank you for being so kind to my family and my boys. Thank you for giving us such a good example of how we can all make room in our hearts to love others. Thank you for letting me stand back and observe the friendship you have developed with my son. It makes my heart so happy to see the richness you each bring to one another's life. You have helped to restore my faith in humanity, and I now hold onto the hope that there are beautiful people in this world. People, who love without exception and those who do not let age hinder a beautiful friendship. You see my son as he is; a strong, independent, self-assured youngster who has never met a stranger, and you let him into your heart. Thank you for keeping the baskets stacked up, our hearts full, and for never shying away from our shrieking excitement when we walk through the doors.