The news spews horrendous headlines from the likes of Paris to San Bernardino and an abundance of other evils that surround us daily. It's hard not to have a sour stomach waking up in what seems to be such a hateful world. It all leaves me wondering if we aren't on the brink of another world catastrophe, which is probably why I'm personally so drawn to things involving the last terrible world crisis. I wouldn't consider myself a history buff, but I'm a sucker for historical fiction books, most specifically anything involving World War II. I believe there's a lot to be learned from the past and I'm always drawn to stories of personal strength during tumultuous circumstances.

Lately, I seem to be binge reading books all about the Second World War so it seemed only fitting that I would make a list of my favorites World War II page turners. 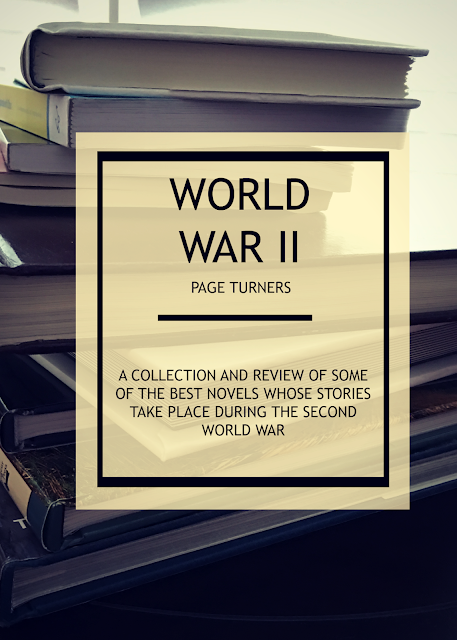 by Laura Hillenbrand
I couldn't put this one down. This is one of my new all-time favorites. I was on the edge of my seat with every twist and turn, and believe me, there are plenty. I had a vested interest in the characters who showed a type of brilliant resilience that could not be conquered regardless of the circumstances they experienced. This story surrounds the true tale of an Olympic athlete and his experience fighting in the Japanese theater and then his capture as a Prisoner of War.

If you've seen the movie, please do not allow that to be your judgment of the book. The book's underlying sentiment is that Louis Zamperini, an Olympic athlete, was able to find an intense sense of faith through all his trials and tribulations - a point almost completely overlooked in the movie.

by Kristin Hannah
The strength of a woman should never be underestimated. The Nightingale is based in France during the war and describes how a young woman grew up much too quickly in light of the circumstances surrounding the war. The woman's adventurous and Joan-of-Arch-like spirit leads her to help save the lives of many downed Allied airmen. Her courage is boosted through the help of sympathetic supporters who did their part to bring an end to the terrible tragedies experienced throughout Europe during World War II.


The Boys in the Boat: Nine Americans and Their Epic Quest for Gold at the 1936 Berlin Olympics

by Daniel James Brown
I remember going to a local restaurant to watch the U.S. play in a World Cup soccer match. I am a former player myself, so I have an inherent passion for the game, but I was struck by the amount of people who were wearing their red, white and blue. I began to look around and quickly recognized that almost every single person in the restaurant was sharing a sense of commodore with the strangers sitting next to them just because they were all cheering for the same team. This doesn't happen very often. When you think about football games the fans are usually divided among us. Half the bar will love the Panthers and the other half are loyal Peyton Manning fans. It's only on certain, special occasions that nearly ALL our friends and neighbors show support for the same team. This was one of those moments.

The Boys in the Boat: Nine Americans and Their Epic Quest for Gold at the 1936 Berlin Olympics expands on that sense of pride for country. It tells about the crew team from the University of Washington and the lengths that they went through in their training to become a legendary, patriotic symbol during a time when the world needed heroes.


All the Light We Cannot See

by Anthony Doerr
Children are the pivotal characters in this Pulitzer Prize-winning, WWII novel. Doerr plays on the juxtaposition of two children of completely different upbringing, in different war-torn European countries, to lay the foundation for a story that I simply could not put down. In addition to a well-composed tale, this novel is nothing short of a great piece of literature; well researched, verbose language and a captivating use of metaphors - it is well worth your time and some of your tears.

by Jodi Picoult
The Storyteller is unlike the other books on this list because the story actually starts in present day and explores the horrors and tragedy that one Holocaust victim endured at the hands of a particular German SS Solider. I've always been a big fan of Jodi Picoult because I think she has a unique way of telling a story so that you sympathize with the protagonist. Each of her characters have a very human and relatable aspect, even the brutal Nazi in this particular story. 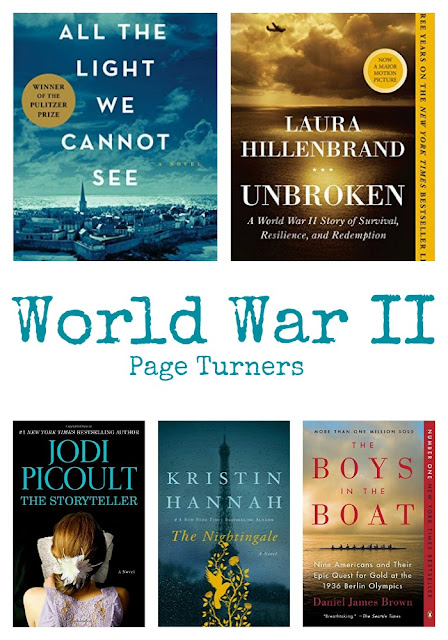 Do you love to read? Join me on Goodreads and check out some of my other book reviews for adults here. If you're looking for great children's books check out any of these great options - here, here and here - all would be great for Easter baskets ;). What are some of your favorite World War II page turners?

Update 7/18/17 - Here is yet another great true story that exemplifies the power of faith and the human spirit.