Before We Were Yours by Lisa Wingate - Book Review

Disclosure: Some of the links in this Before We Were Yours by Lisa Wingate - Book Review post are affiliate links, and I will receive a small commission if you click on one of those links and make a purchase. 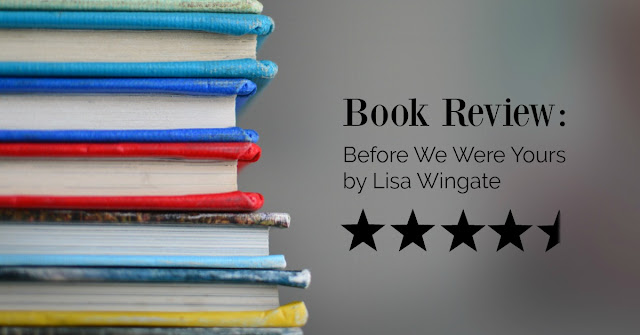 Let me wipe away my overly emotional tears so I can compile my thoughts. I just finished the book, Before We Were Yours by Lisa Wingate, and I have the same sensation I get after watching an emotionally-trying movie.

When I decided to start reading Before We Were Yours, I had no idea what it was about, I only knew it was based in Memphis. Since I have ties to Memphis, and the book was getting rave reviews, I gave it a shot. Let me start by saying I cannot believe this is actually based on historically accurate events and while living there for over 10 years I was utterly ignorant of it all.

Wingate tells the story through two different perspectives exposed side by side, alternating from one chapter to another. One is of a young girl in the early 1940's, Rill Foss who later ends up going by the name May Weathers; and the other is a modern day narration of a young woman, Avery Stafford. The beautifully written novel ultimately ties the two stories together but not until the very end.

The reader is introduced to Rill and her youthful adventures living on a shanty boat floating down the Mississippi Delta with her parents, Queenie and Briny, and her siblings, Gabion, Camellia, Fern, and Lark. The seven of them clearly live an impoverished life, but they are rich in love. The gypsy family parks their floating home on the banks of Delta in Memphis and shortly after that Queenie is swept off to the local hospital with birthing complications while delivering her twins - a boy and a girl. In the commotion of the crisis, the other five children are left onboard the Arcadia (the name of the shanty boat) to await the return of their parents. However, it is the police who come knocking and eventually corral the children to what the reader later learns is The Tennessee Children's Home Society run by Georgia Tann.

It is at this point in Rill's story, Wingate creatively and believably interweaves fact with fiction. The Tennessee Children's Home Society was, in fact, an orphanage in Shelby County (Memphis). It is historically documented as an institution notorious for its abuse of children while funneling them through a black market adoption network which catered to high-end clientele like Hollywood's elite, people of high political standing and influence, and the extremely wealthy. While in the care of the Tennessee Children's Home Society, the children experience the atrocities of everything from bullying and molestation, to confinement and starvation to even death.

In the story, the five children quickly learn they need to behave if they hope to evade the torment and punishment customary for children at the orphanage. Their names are changed, and they are paraded in front of potential parents, like a steer at a cattle show, in hopes their cherub-like blond curls and blue eyes capture the heart of a prospective parent. In a heartbreaking twist of events, one of the children disappears after a run in with a pedophile handyman who lives at the orphanage, Mr. Riggs. Then one after another the children are sold to the highest bidder and adopted to unknowing families who are told stories of needy children, with well-educated parents lost to some unforeseen tragedy. All of the stories and the paperwork which backs them up are fictionalized parts of Georgia Tann's elaborate black market scheme.

While this story unfolds, the reader also learns of Avery Stafford, a modern-day D.C. attorney, and daughter of a prominent South Carolina Senator. Avery is an ambitious young woman being groomed to follow in the footsteps of her father. After her father's health complications become known to her, she returns home to South Carolina to travel the state with him and follow him from political appearance to political appearance. It is along this journey she meets an elderly woman who leaves an undeniable impression on her. How the two stories come together will keep you on the edge of your seat.

Wingate, interweaves romance, family drama, fact fiction, and suspense throughout the tales of these two women.  If you are looking for a great book based on historical events, then add this one to your reading list this year. I highly recommend Before We Were Yours by Lisa Wingate. I give it 4.5/5 stars.

What are you reading? Join me on Goodreads (a social network for book lovers) to see what I have on my reading list this year.
________

If you love to read check out some of my other book reviews here: