I almost did not write this post. In fact, it has been weeks, maybe months, since all this has happened and ever since I have been playing the scenario over and over again in my mind. I wonder if I handled things correctly and what I should do next time this situation arises. 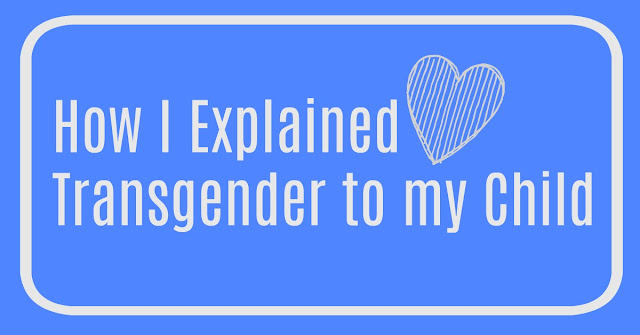 I always knew I would have to talk to my children about identities as hetero or homosexual, transgender and bisexual, I just never imaged the conversation would start when my son was only four-years-old. Like almost everything I have experienced to this point in parenting, it came faster than I could have imaged and I was unprepared. I was unprepared for the questions, for the stares, for the pointing.  I pray I handled things delicately and was sensitive to my child's feelings and those around us.

I am not writing this to make a mockery of the situation. I am writing this because I want to do right by my child who is growing up in a world where he will be faced with people who are different from him in many ways; their beliefs, their appearance, their attitudes, their language, their sexuality. I want him to learn to love all people, regardless of the differences which exist between them. His beliefs, whatever he may choose them to be as he grows, should not hinder him from always loving his neighbors.

My son pointed across a restaurant and very loudly called out, "look that girl is really a boy!" I wanted to shrink under the table, and I tried to quiet him quickly so we would not make a scene. But honestly, in the moment I had no idea what to say to him. And so, I'm writing this for advice on how to handle this situation knowledgeably and lovingly, here is the whole story.

My mom came in town, and I was excited to show her some of the new places I had discovered around our charming downtown area. On our list of stops, we went to a delicious local restaurant known for amazing burgers. It was beautiful outside, and since she lives in Ohio, where the weather in Spring can be rainy, snowy, or sunny, I wanted to take full advantage of our time and sit on a patio. My boys loved it they got to run around and enjoy the mild weather. We were there for an early dinner, and the tables were occupied, but the entire patio was not yet full of patrons. The people dining at the restaurant varied considerably. There were a couple of coworkers, reuniting and sharing a drink,  an older couple who apparently were also trying to enjoy the Georgia Spring weather and another family with children who were all smiles as they indulged on their burgers and fries.

There was one other notable couple in the corner, a man and woman, who keep mostly to themselves and appeared to be in deep conversation. When we arrived, they moved down a couple seats, and I suspect it was so the voices of my little ones did not interrupt their chat. I can honestly say I did not pay the couple much mind and they were positioned behind me, so they were not in my line of vision. My oldest, however, was seated directly in front of them and it was unavoidable for him not to notice them discreetly sitting in the corner.

In between mouthfuls of fresh cut french fries, he looked up a couple times to observe his surroundings - an act quite common for a four-year-old. At one point, without hesitation, he pointed his finger at the couple and said, "look that girl is really a boy!" He did not realize the impact of his comment, and I cannot be sure if the couple heard his innocent observation or not. However, we shushed him quickly and redirected his attention to French fries and passing vehicles. Distraction techniques are a saving grace and simultaneous frustration of having young and curious children. In this instance, I used it to my advantage.

In the meantime, my mind went in a million different directions, trying to decide how to lovingly and honestly explain the situation to my little man who suddenly seemed so grown up. He had propelled himself into a very profound scenario with one simple observation, and as an adult, I was faced with explaining a situation I had not fully come to terms with from a personal standpoint. For hours I was content on not rehashing the situation and decided to just ignore it altogether. But before bedtime, I had a change of heart. I decided he needed to be confronted with the weight of his observation. I wanted to approach the topic delicately but head on. I wanted to give him an opportunity to ask questions and think through his comments.

I asked him about his day, a practice typical during our bedtime routine. We discussed the highs and lows. Finally, I gently nudged him to recall our dinner, and immediately he mentioned the lady who was really a man. I stopped him and explained that throughout life we will run into people who are different from us in one way or another. They might look different, speak differently, or they could believe in differing truths. I concluded by telling him regardless of our differences it is impolite to point those things out so publically. I went on to explain that our hearts have enough room to love all people regardless of the outward things which make us each so unique. I told him loving someone does not mean we agree with all their actions. This lesson seemed a bit mature for my youngster. I tried to use an analogy he would understand; I love him to the moon and back, always and forever (a saying I express to him and his brother daily), but it does not mean I agree with him when he hits his brother or does not share his toys. Love transcends sins and personal choices. It is not his job to be critical of the lifestyle others choose for themselves. It is his job to lead by example and offer a safe haven of love and comfort for all people. Jesus was a perfect example of this and you have to look no further than the Gospels to get a glimpse of how loving another person does not mean you accept sin, it means you see beyond it.

I do not know if this message is over his head and I'm sure the conversation will come up again as he grows more knowledgeable and mature. I also have some research to do from a biblical and social standpoint. I hope I have done him and the woman at the restaurant, justice in how I handled the conversation about transgendered individuals. In a modern, quickly evolving world, it is one of my biggest challenges as a mother to maintain an open heart but also stay true to my convictions and the teachings of my church. I am committed to sharing those beliefs with my children in a way that will allow them to make their own decisions as they grow but also to teach them to be sensitive to the needs of others.

As a parent, how do you handle these challenging conversations with your children? If you have experience with the transgender community how do you suggest we approach the topic with our youth, knowing so many adults do not fully understand it themselves?